After running this site for several years, many similar questions arise, useful links and general information have been posted on the FORUM. I thought I'd try to maintain this FAQ page and compile some of these "repetitive", useful and important posts on this page as an archive. If you believe something else should be listed here, let me know. Thanks for supporting this site.

What are the different Griswold TMs and/or a heat/smoke ring?

The heat ring is the small rim around the outside of the bottom of many (usually earlier) skillets and some other pieces. Its purpose is to raise the pan's bottom slightly from the old wood range cooktop so as to equalize heat. Sometimes incorrectly called Smoke Ring, Fire Ring, or another name, none are correct since the heat ring has nothing to do with smoke or fire. Griswold called what we collectors have named "heat ring" just "rim" or "rimmed bottom" in their early catalogs.

The unmistakable mark with GRISWOLD inside a cross and two circles that Griswold used on most of their pieces is their "registered trademark" or TM. It has often been called a "logo" which is not incorrect. However, since it was registered with the US Patent Office in 1909 as an actual trademark, it would seem that the term "trademark" or "TM" would be preferable to "logo" More info on the Griswold TM at THIS LINK . Here's a pix of the small TM, block TM, slant TM and heat rings.

As far as collectors are concerned, nothing is special about the letters that sometimes are cast with the pattern number on Griswold pieces and a few other makes. Cast iron pieces are made in a sand MOLD and that mold is made by packing special casting sand around a PATTERN. Each piece of iron has to have its own mold as the mold is a one-time-use thing which is destroyed in order to remove the piece cast in it. In order to make enough molds a foundry might have to have several or more patterns for popular, high production pieces. In this case each pattern has a different letter (plus, usually, one with no letter) on it after the pattern number which would be the same number for like items. It really doesn't make any difference to collectors which pattern was used to make a piece because they were all the same (but sometimes with very minor differences) except for the letter. One of Griswold's most prolific pieces is the No.8 block TM smooth bottom skillet. For these Steve Stephens, a long time collector, has identified all letters of the alphabet (plus no letter), except for the letters I, O, U and Q and some of these could still turn up. Pieces that were produced in low quantities may have only one pattern to make all the molds that were required. The preceeding deals mostly with Griswold pieces but may apply to other makes as well. Wagner called their numbers "catalog numbers" but, basically, they are pretty much the same as Griswold's pattern numbers.

My Griswold pot/muffin pan has a Wagner logo too!!

Seen any of these? 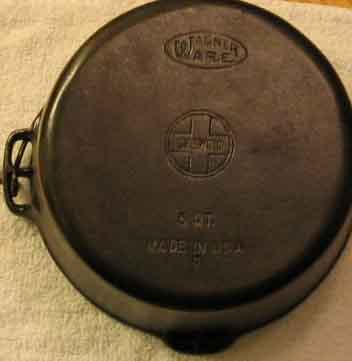 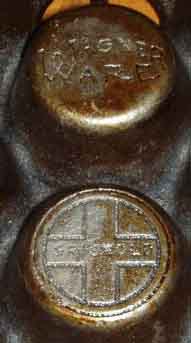 Well they were not made by Griswold.

Wagner and Griswold came under the same ownership in 1957 as follows. Randall Corp. bought Wagner in Nov. 1952. McGraw Edison Inc. bought Griswold on March 29, 1957 and then sold it in December 1957 to Randall who already owned Wagner. Griswold production in Erie, Pa. ceased in Dec. 1957 and all subsequent "Griswold" pieces were made in the Wagner foundry in Sidney, Ohio. Randall then sold both Griswold and Wagner in 1959 to Textron which sold both companies to General Housewares in 1969 who continued production at the Wagner foundry until it closed in 1999. Griswold and Wagner operated for a time or longer as separate divisions across the hallway from one another. Griswold pieces made in the Wagner foundry do not say Erie on the piece and were made from old Griswold patterns slightly modified or Wagner patterns that were modified. Many Wagner pieces were made using modified older Griswold patterns. All of these pieces were usually marked on the bottom "Made in USA". Also, sizes started to be marked in "inches" instead of in trade numbers or "No." numbers. Quality and style began to decline markedly. Some new patterns and styles were developed including the Griswold "Hearthstone" pieces under General Housewares (GHC). During the later 1970's and/or early 1980's many pieces were marked with BOTH the Wagner and Griswold trademarks (logos) on the bottom of the pans. In 1991 a new line of Wagner pieces marked "Wagner's 1891 Original" was put into production to celebrate Wagner's 100th anniversary. This is the line that remained in production as a regular production item until the foundry closed in 1999. Some "limited production" piece were made in the 1891 line. Most collectors do not consider Griswold pieces made in Sidney to be real Griswold although the argument could be made that they are. In fact, almost any pieces made after 1960 has limited collector appeal and the quality is not as good as the earlier pieces.